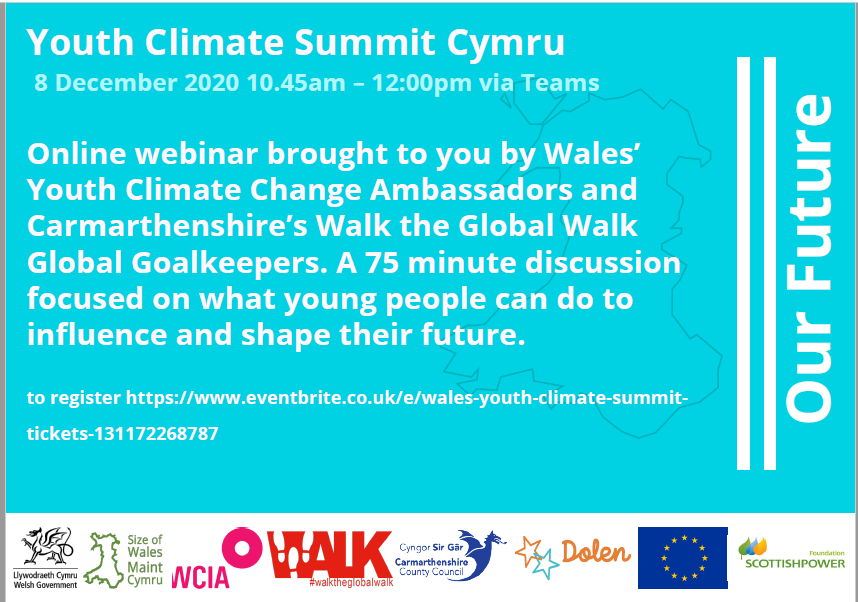 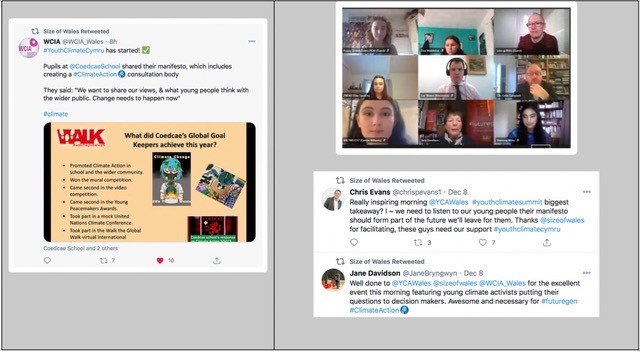 On Tuesday 8th December 2020, the first online Youth Climate Summit Wales was held, attracting over 50 participants. The event was led by the Youth Climate Ambassadors for Wales, supported by Size of Wales and WCIA, and Walk the Global Walk Goalkeepers from Ysgol Bro Dinefwr and Coedcae School, supported by Carmarthenshire County Council.

Members of the Senedd (the Welsh Parliament) participating were Lee Waters, Deputy Minister for Economy & Transport and John Griffiths, Chair of the cross-party Biodiversity Group. They were joined by Councillor Cefin Campbell, Carmarthenshire County Council, and Jane Davidson, former Minister for the Environment and Sustainability and now Pro-vice chancellor of University of Wales Trinity St David’s.

Following an opening introduction from the Chair of the Youth Climate Ambassadors, Poppy Stowell-Evans, the summit started with presentations from Carmarthenshire’s Global Goalkeepers.Milly and Isabel from Bro Dinefwr were inspired to get involved at the very start of the project in 2018, following learning in class about the importance of developing sustainable communities, and have been fully committed ever since. They spoke confidently of campaigns to reduce single use plastic in the school and local community, and how they had researched ways of reducing air pollution outside the school. Despite the challenges of the pandemic, Bro Dinefwr has successfully partnered with local organisations and is installing electric car charging points in its grounds. The school is working hard to develop a substantial outdoor learning area, the first of its kind in a secondary setting in Wales, designed to help increase biodiversity and combat carbon emissions.

Year 9 Global Goalkeepers from Coedcae School then described actions they had taken to raise awareness of the need for climate action in the wider school and local community. Along with the other schools involved, they had participated in events and taken a lead on sharing their actions through the medium of visual art and video. “It’s been such a challenging year and it wasn’t possible to do all the actions we planned. But being part of this project and continuing it during lockdown made us feel less isolated and really connected to the outside world. We had the opportunity to engage with other schools, charities, and businesses as well, leading to the creation of our Climate Action manifesto, which we are all so proud of.” stated Lily. Coedcae then presented the 8-point manifesto, the creation of which involved 6 local schools, and which has recently been officially endorsed by Carmarthenshire County Council.

The ensuing question and answer sessions gave young people the opportunity to challenge the decision makers present themselves as well as put questions submitted by members of the audience.

When asked what they felt to be the main thing that young people should be doing to help the environment, each panellist acknowledged the commitment of the young people present and their clarity of vision. Lee Waters, deputy minister, recommended they ‘demand more and have impatience for change’. He also highlighted the urgent need for everyone to do more and to work together.

Councillor Cefin Campbell remarked on the excellent inspiration provided by the young people present. He said that having the Global Goalkeepers challenge him and other decision makers responsible for Carmarthenshire’s agenda for sustainable change had served as a ‘political conscience’, and had made a contribution to formulating actions for the authority to become zero carbon neutral by 2030.

Jane Davidson reminded the audience of the unique Wellbeing for Future Generations Act Wales that she had helped instigate when in government. She urged young people to use the act to challenge those in authority in the public sector and demand more of decision makers.

Strong arguments were then made by the Youth Climate Ambassadors as to the need to fight for climate justice and they went on to explain their role as individuals in motivating others. The chair, Poppy Stowell-Evans, stated that ‘climate change is quite possibly the biggest and most paramount issue of our lifetime’ and called for radical action.

Through their 6-point manifesto, the Youth Climate Ambassadors outlined with clarity and conviction what they wanted to achieve in their organisation and called for action from businesses in Wales and Welsh Government.

“It’s so encouraging to see young people moving governments here and across the world in the right direction. You give us all hope for the future, especially now that 16 and 17 year-olds will be able to vote in the Senedd elections.” commented John Griffiths, Welsh Government.

The young people involved in this event deserve huge acclaim and the future can only be influenced in a positive way by their determination to ‘turn up the volume on youth voices on climate action’.